Temple of NudgesAs it stands, Temple of Nudges Video Slot is probably one of the most rewarding Mayan slot ever released by NetEnt. Indeed, this game surfaced in the lobby of most 100% legal NJ casinos in summer 2019. And what a great surprise this medium variance game is.

In fact, the new 5 reels, 3 rows game offers 243 ways to win. Plus, the max win is a lot superior to NetEnt’s other adventure slot Gonzo’s Quest. What’s more, is that the new Temple of Nudges Video Slot is also a fantastic bet because the combination of features and mechanics means that you’ll have a lot of spin time with one deposit. So, let’s explore this new game together and tell you why we think most players will adore it. 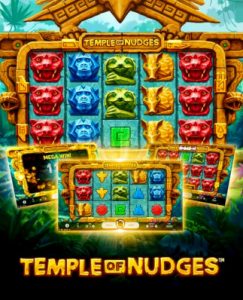 To sum up, the action of Temple of Nudges Video Slot takes place on one interface. But it won’t be as obvious as in Space War video slot, per example. In fact, the nudging reels mean that every time a winning combination appears on the grid, all reels will move down (including the combo that triggered the nudge). So, the reel nudges mean that potentially new identical symbols could appear on the top row to increase the value of your existing winning cluster. So it’s almost like getting a Re-Spin or several ones as a matter of fact since the reels will always nudge until no more symbols increase your win.

But actually, don’t confuse the reel nudges with the actual Re-Spin this game offers. Indeed, while both features mean that you don’t have to pay to win. They work quite differently as you’ll see.

As you know the reel nudges triggers a complete movement of all 5 reels. And so, in other words, it means that after 3 nudges the combo that trigger the feature won’t be present on the game interface. Makes sense, right?

So, that’s where the Re-Spins feature comes handy. In fact, if a Re-Spin overlay appears on top of any symbols, all symbols of the same type (even if they don’t deliver a win) will be sticky. And the reels that contain no matching symbols will Re-Spin to give you, once again, a chance to increase the value of the sticky cluster. The good news is that if a Re-Spin overlay appears again. And again you’ll trigger the feature once, twice or 3 times more.

Why should you play Temple of Nudges?

On first glance, some of you may be a bit disappointed by the paytable of Temple of Nudges. But actually, to understand how this game could reward huge payouts, it’s important to take into account the 243 ways to win, the reel nudges and Re-Spins too. Which means that you can win more than once with one cluster. And because of this, it’s with no hesitation that we’ll recommend you to try Temple of Nudges.

You’ll see it’s an engaging game even if the graphics are perhaps not as detailed as other NetEnt releases. And if you’re not sure if you’ll like this slot. Well, remember to check out our casino bonus section. The truth is, they’re many casinos in new jersey that offer free cash on signup. So you can try this game Risk-free if you’d like.