As it seems, President Trump was possibly right to invest in Space force. In fact, according to NetEnt, there’s an intergalactic battle happening right now. Well, at least on the reels and in most 100% legal NJ casinos with the release of Space Wars Video Slot.

Granted that the new game is only a creative take of what could lurk above our head. And surely when spinning this game with its spooky soundtrack, you won’t be able to let your imagination run wild. Sure, you could think about doomsday. But isn’t it more fun to dream about pocketing the max win of 400,000 coins this game offers?

To sum up, the action of Space Wars Video Slot takes place on one interface. And this is because this game does not offer a Free Games Bonus nor does it have a Pick’n click game either. But rest assured there’s still a lot of value up for grabs in this game. And the Re-Spins feature you’ll trigger after any winning combination means that you’ll have the chance to spin for free as well.

The Re-Spin feature works like this. In essence, after 3 or more identical aliens land on a payline, the game will animate the “alien incubator” on the right-hand side of the reels and will award 1 Re-Spin. Now unlike other games, this slot won’t award another Re-Spin if another winning combo appears on the reels once more. So, the Re-Spin is a one off feature that you can trigger only once after a win. 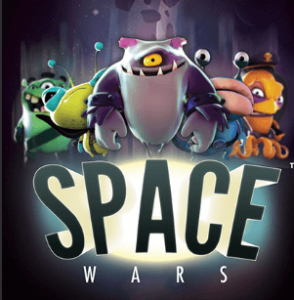 As you can see, Space Wars Video Slot is a straightforward game to play. And yet there’s a lot of opportunities to fill-up your pockets because of the Wilds symbol. In essence, the Wild can only appear on the second and fourth reels, and from time to time, it’ll cover the full reels. And so this naturally increases your chances of making a winning combination.

Without a doubt, players who are looking for an easy game to understand that can provide huge payouts will enjoy Space Wars. Indeed, as you’ve seen above the paytable of this game is on the higher end of the scale. And that’s even if the Wild symbol doesn’t have a paid value.

Why should you play this video slot?

All and all, Space Wars is a well-conceptualized game. The 3D like aliens on the reels a very fun to watch as they’ll animate themselves as they move into the alien incubator. There’s also a superb light effect every time the game awards a Re-Spin. And the big win animation is also quite fun since it’s a flying saucer.

So, if you’re one of those players who love fast-pace games with straightforward mechanics and big rewards. Well, this one could be perfect for you because the RTP is above average and also because the game has multiple bet levels. So you’ll get maximum flexibility to adjust your wager. And since it’s a NetEnt game, you won’t need to look very far to find it since most 100% NJ casinos offer it as well. So check out our bonus section to see who’s got the best deal for you.