MotorHead video slot is the final release of NetEnt’s Rock Trilogy. The game landed in European casinos just a few months after the death of Lenny. It’s a sad coincidence, but know that NetEnt had planned this release since the beginning of 2016. Anyhow, some say that the MotorHead slot is a nice homage to the artist because let’s face it. Lenny loved slots.

Very much like the artist, the MotorHead slot is hardcore and super entertaining! If you wanted to spin it, we’d recommend you’d crank up the volume. Since the band’s hit song The Ace of Spade accompanies the action of the reels.

So, are you ready to rock the reels? Head over to one of the casinos recommended on this page. You’re guaranteed to have a blast especially if you claim the free cash bonus our team negotiated for you! 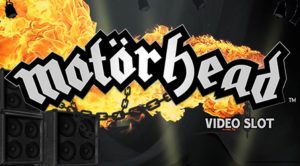 How to trigger the bonus features of MotorHead video slot?

First of all, when you play Motorhead, know that every spin can trigger the mystery reel feature. That is unless the bomber feature is active. In essence, the Mystery reel will guarantee you that at least one full reel will have identical symbols. So it tremendously increases your chances of making winning combos.

Now the bomber feature is a random feature in the base game. When active know that anywhere between 5 to 15 identical symbols will appear anywhere on the reels to create winning combos.

Why should you play MotorHead video slot?

In short, MotorHead is a very low volatility slot. This means that if you only have a small budget to play casino with, its a great game for you. It’s worth knowing that low volatility slots frequently pay even if the wins are more modest then on higher volatility games.

Granted that the paytable of Motorhead is not the highest, but since this slot has such a great RTP its ok. Also, when you look at the paytable, you have to take into account that this game pays 76 ways! So, you can’t make a 1:1 comparison with a 20 paylines slot per example.

There’s no doubt that MotorHead is a unique game given its reel formation. So if you fancy a change, you should definitely try it out at Harrah’s Online Casino.