Home Slots Online NJ Ever After 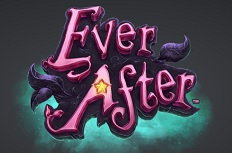 Ever After video slot is a game that features the absolute best of fairy tales! In fact, this slot not only has beautiful graphics and animations. But the action of this game is also accompanied by a fairy godmother who’ll grant you wishes and will help you get your hands on that much desired 4860x you bet win!

What’s more is that with its 243 ways to win this slot sure delivers a lot of action! Curious to know more about this October 2018 release? Then don’t miss the review we’ve prepared for you below!

Quick game facts on Ever After video slot

How to trigger the bonus features of Ever After video slot?

A game like this would not be complete if it didn’t have fantastic bonus features. So, let’s have a closer look at what you get on top of a great base game.

This feature can trigger randomly on every spin. So what is the feature about? When triggered, a fairy shows up beside reel 1, and she’ll start waving her magic wand to enchant low-paying symbols.

During the enchantments, the fairy can transform as many as 3 symbols on the reels. To explain, let’s say that the fairy enchants the heart symbol that pays out 20 coins when 5 of a kind align on a payline. After the enchantment, the low-paying heart symbols will transform into the Red woman that pays out 60 coins. Additionally, during the feature, all Wild symbols will expand to cover the reel entirely.

For more information on the enchanted symbols, please see the paytable.

First, to trigger the Free Spins, you need to get 3 or more Scatter to land on the reels. And in this game know that they’re actually 2 different Scatter symbols, and the amount of Free Spins you’ll trigger entirely depends on the Scatters that landed in view. The minimum amount of Free rounds this game will reward you is 6, and the maximum is 60.

Also, it’s worth knowing that during the Free Spins bonus the Mirror Magnificent feature we describe above is triggered in every spin.

Why should you play Ever After video slot?

A great thing about Ever After video slot is that this game can deliver a lot of action in the Free Spins bonus! In fact, it’s not every day that you’ll have the chance to trigger as much as 60 Free games at once. But let’s not forget that the Scatter symbol will also guarantee you a big win when 5 symbols land in view since it’s the best-paying symbol of the game.

All and all, this video slot will appeal to all levels of players because it has a Higher than average RTP and a min bet that will only cost you $0.15!

Try it now and see what surprise your fairy godmother has in store for you! Have fun!